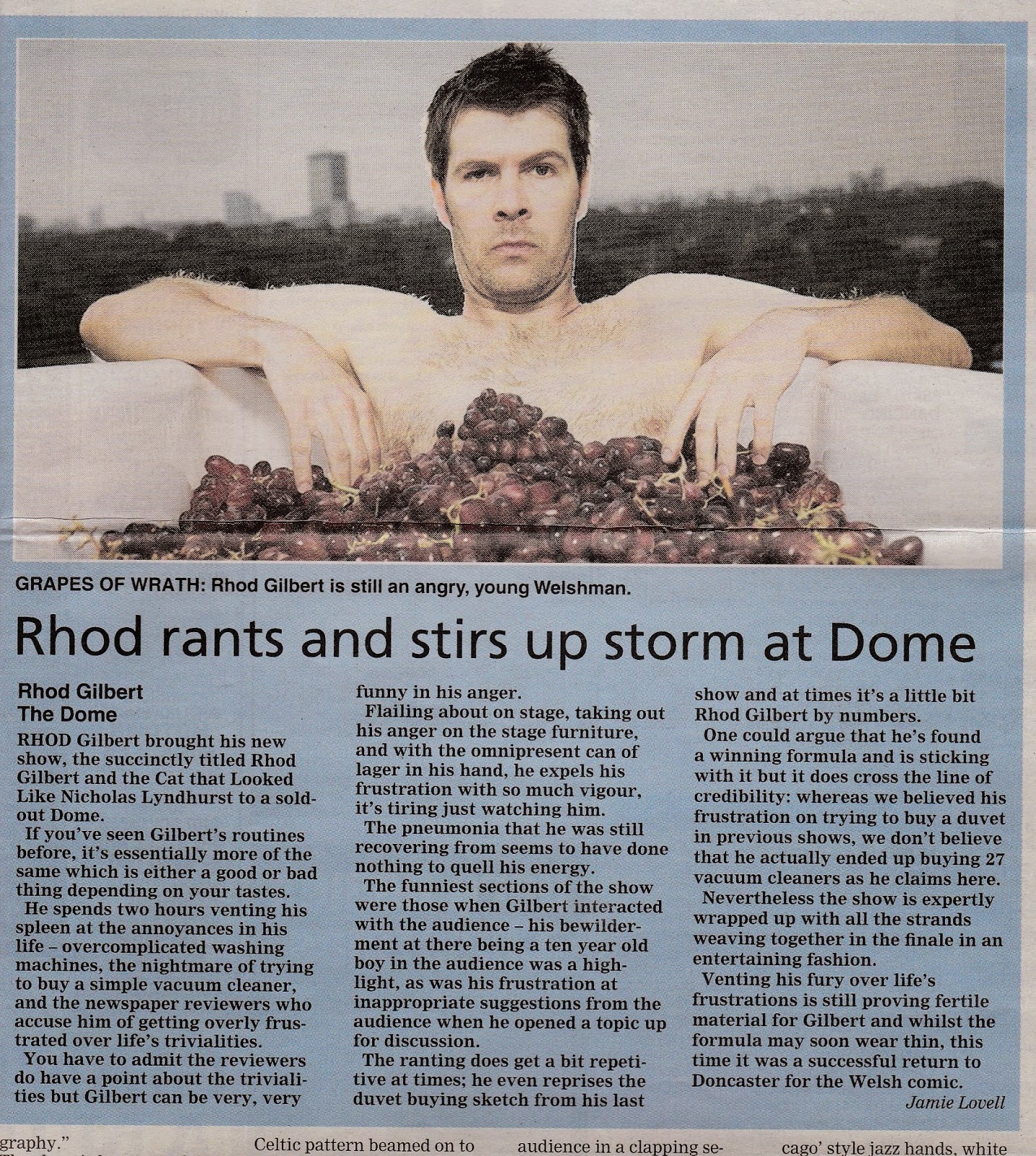 Rhod Gilbert brought his new show, the succinctly titled Rhod Gilbert and the Cat that Looked Like Nicholas Lyndhurst to a sold-out Dome last week.

If you’ve seen Gilbert’s routines before, it’s essentially more of the same which is either a good or bad thing depending on your tastes. He spends two hours venting his spleen at the annoyances in his life – overcomplicated washing machines, the nightmare of trying to buy a simple vacuum cleaner, and the newspaper reviewers who accuse him of getting overly frustrated over life’s trivialities.

You have to admit the reviewers do have a point about the trivialities but Gilbert can be very, very funny in his anger. Flailing about on stage, taking out his anger on the stage furniture, and with the omnipresent can of lager in his hand, he expels his frustration with so much vigour, it’s tiring just watching him. The pneumonia that he was still recovering from seems to have done nothing to quell his energy

The funniest sections of the show were those when Gilbert interacted with the audience – his bewilderment at there being a ten year old boy in the audience was a highlight, as was his frustration at inappropriate suggestions from the audience when he opened a topic up for discussion.

The ranting does get a bit repetitive at times; he even reprises the duvet buying sketch from his last show and at times it’s a little bit Rhod Gilbert by numbers. One could argue that he’s found a winning formula and is sticking with it but it does cross the line of credibility: whereas we believed his frustration on trying to buy a duvet in previous shows, we don’t believe that he actually ended up buying 27 vacuum cleaners as he claims here

Nevertheless the show is expertly wrapped up with all the strands weaving together in the finale in an entertaining fashion. Venting his fury over life’s frustrations is still proving fertile material for Gilbert and whilst the formula may soon wear thin, this time it was a successful return to for the Welsh comic.

Hello
I am a competitively-priced copywriter based in Doncaster, UK. I am available for all your writing needs - whether this be updating blogs, creating direct mail shots, leaflets, posters, advertising campaigns, drafting press releases, social media campaigns (through Facebook and Twitter) and much more. I am also an experienced academic writer, as well as having spent some time as a reviewer of films and theatre. In addition to copywriting, I also write short stories and screenplays.
Please look around the site for a small sample of my work, and do not hesitate to contact me with any enquiries or for a free quote.
Jamie Lovell